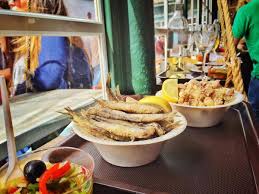 Being strategically placed in the Mediterranean, it is not surprising that there are so many varieties of Menorca food and drink. The food and drink here has influences left by the many invaders over thousands of years, from the British, Romans, Arabs and the French.

Seafood – Seafood has always been extremely important here. The island also has a history of cattle farming – both for dairy and meat production. Menorca food and drink has the best of both land and sea. One of the most well known seafood dishes is the “caldereta de llagosta”, a succulent lobster stew served on thin slices of toast. This dish is made from the spiny blue lobster, which is caught in the waters close to the coast. This is a popular menu item for the traditional family Sunday lunches, which are served in most restaurants across the island. Some other popular seafood dishes are escopinyes and peus de cabrit. Baked sea bream, squid and octopus or grilled red mullet served with baby potato’s, grown on the island, are also popular dishes on local menus.

Mayonnaise – The islanders claim to have discovered mayonnaise. Mayonnaise was first produced in Maó in18th century by a French chef. This rich sauce took Europe by storm at the time and the Menorca people have no doubt in their minds that it was invented here. The sauce was first made in Maó, which is where the name mayonnaise comes from.

Dairy – With a lot of dairy cows on the island, milk, butter and cheese are a very important part of Menorcan cuisine. Richard Kane introduced Friesland cows to the island early in the18th century. Cheese making artifacts dating back to 3,000 BC have been found here. They have a long time to perfect the local cheeses and they are now famous for their superb quality. Menorcan cheeses have a very distinctive flavor, which is due to richness of the pastures and the climate. The cheese made here is matured for up to a year, giving it a similar consistency to that of Parmesan. Today the curado and semi curado cheeses have their own D.O.P. regional trade mark and a well know worldwide.

Meat – The meat produced here are also well known for their quality and flavor. Menorcan people often eat sobrasada (a pork sausage-meat made with red peppers) and carn i xua sausage made of lean meat and bacon cubes.

Wine – Wine production was a vital part of the island’s economy with so many thirsty troops on the island during the French and British occupations. Many vineyards were killed by phylloxera in the 19th century, but wine production is on the rise again as many new vines are being planted. The hot summer sun and calcium rich soil of the island are perfect for bringing good flavor into the grapes. Binifadet Chardonnay was added to the wine list of El Bulli in Cataluña. This restaurant was voted the world’s best restaurant of 2008.

Gin – Gin was a favorite of the Navy at one time and within a few short months of British occupation local gin was being produced to supply the thirsty sailors. Today the gin of Maó (Gin Xoriguer) is well known and is still produced from a secret recipe, which is flavored with local juniper berries. Pomada is one of the favorite drinks at fiesta time for many Menorcans. Pomada is a refreshing drink made from lemonade and gin.

Sweet dishes – The Menorcan sweet dishes are also well known in Spain. There are delicious small cakes which are made with almonds or toasted nougat. The traditional ensaimadas, a delicious circular soft pastry cake that is covered in icing sugar simply melts in the mouth. You have to give both of these a try!

Traditional cuisine – In the 20th century, traditional cuisine was in danger of disappearing, as busy modern families did not have the time for preparing food as their mothers and grandmothers did in the past. But today, some of the chefs here believe that the old recipes and ways of cooking should be preserved. As a result traditional dishes are making their way back onto the menus of many restaurants.