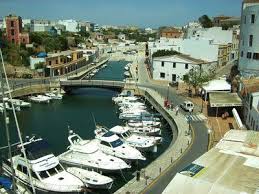 With so many things to do here in Menorca, you cannot possibly get to everything, which is why we have compiled a list of 10 amazing things to do and see while visiting here.

Ciutadella – The old town of Ciutadella is full of passages, archways and sudden unexpected views. Situated on the western end of the island, the hills of Mallorca are clearly visible. The city was founded by the Carthaginians over two thousand years ago. It was the capital until the 18th century, when Richard Kane transferred the island’s power to Maó. Ciutadella now has a population of 28,000 and it is regarded as the most beautiful town in Menorca. Plaça des Bornis the main square and it is lined with aristocratic palaces of the 18th century.  Somewhere in the 14th century, the cathedral was built on the site of the former mosque.  There is a small port lined with fishing boats where the ferry leaves everyday for Mallorca.

Port of Maó – The Port of Maó extends about five kilometers into the heart of Menorca’s capital. It is one of the world’s largest natural harbors. Back in the day, the docks were some of the busiest in the Mediterranean, with ships from all over the world unloading cargoes there. Maó still has many traces of the British rule in years gone by, from the Georgian town houses to the neo-classical Town. The old dock area is now filled with restaurants and cafes, which make a killing when visiting cruise ships dock beneath the walls of the city. Maó has a relaxed easy going atmosphere where everybody seems to know one another.

Bay of Fornells – This is a beautiful inlet on the northern coast. The Bay of Fornells is over five kilometers long and two kilometers wide, it has shallow sheltered waters that provide the perfect location for all water sports from windsurfing to kayaking and dinghy sailing. An 18th century British built watchtower looks across the narrow entrance because of the fact that the area used to get raided by pirates in the past. Today it is very safe and is a popular place for visiting yachtsmen cruising around the island to visit. The old fishing village has some excellent restaurants, with caldereta de llagosta being one that serves up a delicious succulent lobster stew. Menorca’s largest marine reserve is located just off shore the Bay of Fornells and is a Mecca for scuba enthusiasts.

Megalithic monuments – Menorca is like an open air museum, with one of the largest collection of megalithic monuments in Mediterranean. These amazing standing stones and ancient settlements of the Talaiotic culture are evidence that a sophisticated and well organized society did exist here about 2,000 years BC. The two main ones are the Taula and the Naveta. The Taula is two massive pieces of stone in the form of a high freestanding table or altar.  The Naveta are large burial chambers made of blocks of stone.

The above four place are only a drop in the ocean when it comes to things to do and see here. Some of the other attractions include Favàritx lighthouse, the Fortresses of Marlborough and La Mola, the amazing views from Monte Toro, the festivals, quarries and of course, the beaches. Make sure that you get all the relevant information regarding these other things to see and do before you embark on your journey around Menorca.